We are processing your request, please wait ...
< Return to blog
Dance of the Flyers 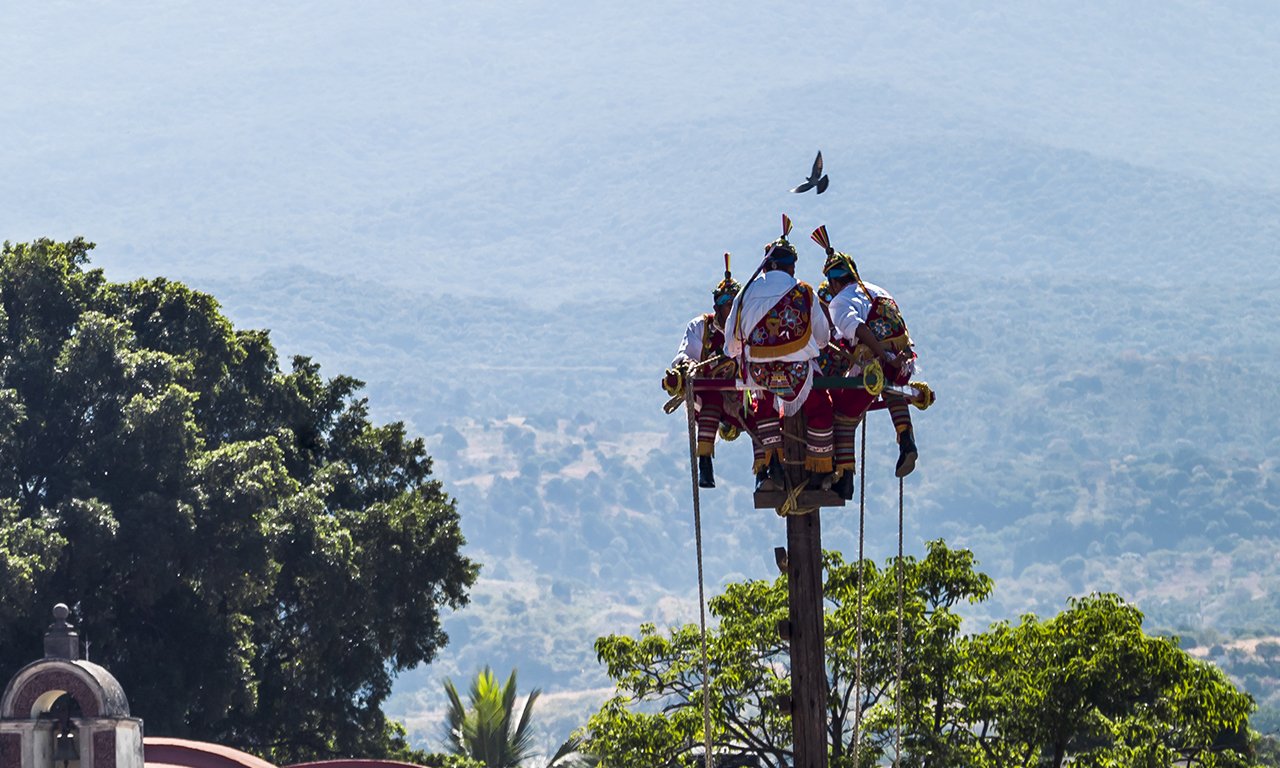 One of the most representative dancing in Mexico who happens at great height,  is known as “Voladores de Papantla” (Dance of the Flyers). All you have to do is look up and behold the amazing performance of music and movements in the air, four courageous dancers along with one at the head who is standing at the highest point dancing to the sound of flute and drums.

The “Voladores de Papantla” (Dance of the Flyers) or better known as “Pájaros de la Tierra” (Birds from Earth) is a millennium ritual associated with fertility that native totonacos had been practicing years and years ago. The word Papantla gains its meaning from the language of Papan which means “ave bulliciosa” (“bustling bird”) and “tlan” which means “lugar” (place). This ritual ceremony is considered a work of art and it represents honorably the meaning of “Li Tutu Nakú” which means “To be Totonaco”. This impressive representation reaffirms the importance of identity in ethnicity. This ritual is part of the Cultural Heritage of Humanity worldwide. The ceremony of “Voladores de Papantla” is also considered one of the most beautiful tradition that exist in the Papantla region of Olarte and Veracruz.

The Dance of Flyers is also known as Kos’niin or “Fly of the Dead” that represents the health of the Father sun and its done as a request to the god of rain to fertilize the land. Likewise, this ceremony has been practice for more than 2500 years. The actors who comprise the four dancers also symbolize the four cardinal points, and the way they descend to the ground represents the falling of rain.

The Beginning of the Ritual

The history of this ritual originated since a long time ago in Totonocapan, place where drought endure quite some seasons and there had been no harvest to collect for the people. In that moment, the sages of the region asked five young men to look-into the vegetation to find the tallest and straightest tree, thus honoring the God of Fertility known as Xipe Tópec.

The ceremony begins with the search of a tree, a task done by the caporal, this important character has the upmost authority to the dancers. As they find the tree, everyone dances around it and bows down in a form of apology. At the same time, they spit out aguardiente from their mouth which will points out the four cardinal points. Afterwards, the men cut and file the tree trunk, then carry it with the help of “Tarros” (Bamboos), that helps to lift it, so it does not drag on the ground, since it is believed that if it drags, bad luck will be brought to the people.

Later a hole is dug in place where they will bury the tree and then they add stair made from a rope, which will then help the dancers get to the highest point of the tree. In this moment, an altar is also set up and decorated with: púlakles (beans tamales), aguardiente, holy water, white flowers, candles, tabacco, incense, and two mask that represents the owner of the dance. The next morning, the flyers eats the púlakles, afterwards everyone is then moved to the place where the dancing pole is chosen, which can measure as high as 18 to 30 meter. After everything is gather ad set, the dance will begin.

The dancers prepare and show-off their special attires along with their striking music instruments. The attire represents the flying of birds in the sky and the color red represents the blood of people who have fallen from the flight. The ribbons that adorns are related with spring and nature.

The men climb the pole till they reach the spinning tecomate which is the supporting point for the dancing flyers who also find support from a frame where they will jump into the air. The caporal (leader) stands in the center of the dancers playing his drum and flute to the rhythm of prehispanic music notes. The other dancers, meanwhile, jumps into the air with rope fasten on themselves extending their arms as they gaze at the sky. The dancers dance to the rhythm of the music indicated by the caporal, since every sound represents a certain movement. And like so, the dancers may spin around 13 times according to the 13 sky of the sun and when multiplied by 4 will give us 52, the number of the complete cycle in the solar prehispanic calendar. It is a fantastic show!

The Dance of the Flyers Nowadays

The ritual ceremony of the flyers is done during festivities, carnivals, the solstices and equinoxes, festival of the dead and ceremonies related to the planting and harvesting. Nowadays, the fights can be done in any moment, since it has become a display activity, for this reason, the men who perform these flights must be prepared physically, mentally and spiritually.

The importance of this ritual is that the community can present this valuable dance to everyone in the world, and in this way, it may be accepted and respected. In the modern days, the Dancer of Flyers can be found in different touristic sites such as Tlaquepaque, Puerto Vallarta, la Cumbre del Tajín, likewise in Tequila, Jalisco, where the great show is presented since nearly 2 years ago by men and young people who boast their cultural roots. If you're visiting Tequila, don’t miss the chance to witness this majestic ritual by visiting the main square of the city where you can enjoy the famous dance of the “Pájaros de la Tierra” (Birds from Earth).